Korea, Are You at Peace? Tales of Two Women Travelers in a Troubled Land

Here’s a blurb about a book just submitted to the publisher. It should be out in another two or three months. 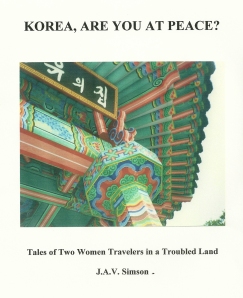 You might not think a modern woman scientist and a Victorian travel writer would have much in common. Yet in this travel memoir, I find myself channeling Isabella Bird Bishop, a nineteenth century adventuress, who visited some of the same Korean countryside I did a century later. The Korea I visited was no longer her mysterious Hermit Kingdom of Asia but rather a divided and dangerous world. During the century between our visits, Korea was abandoned by China, deceived by Russia (and by the U.K. and U.S.), annexed by Japan, and finally ‘liberated’ by the USSR and the U.N. Subsequently, the peninsula was subjected to a devastating three year war and further fractured by Cold War ideology. The Korean War, in fact, never officially ended.

This peninsula has recently emerged onto the world stage as both an economic success story (South Korea) and an ideological, political nightmare (North Korea). Korea, Are You at Peace? is the personal story of a Western woman living in the East, observing and trying to understand twenty-first century Korea and its culture, as viewed against a historical backdrop provided by a late-nineteenth century woman travel writer. Insights of others who chronicled the devastating twentieth century in Korea are included in the narrative.

Korea, Are You at Peace recounts my experiences as a teacher and U.S. military contractor, living, working, and traveling for two years in South Korea. I came to admire the courage and endurance of the Korean people, but it was impossible not to sense their pain and anger, nor to marvel at their extraordinary energy and resilience. Several intentions underlie my desire to make these experiences public.

• To provide a brief, readable history of Korea, with the hope that Americans may better understand the country—its past and its people.
• To compare Korea, the reclusive Hermit Kingdom of Asia at the turn of the 20th century, with a radically altered Korea at the turn of the 21st century—a divided peninsula and political tinderbox.
• To describe what it is like to be an American military contractor in a foreign land and to offer insight into the cultural discord engendered by an American military presence on a local foreign population.
• To narrate the often humorous challenges of a Western woman traveling alone in East Asia.

For a concise, accurate, and sympathetic history of the Korean peninsula, read the Appendix of this book. For an engaging narrative of Korea and its past century, read the whole book.

1 Response to Korea, Are You at Peace? Tales of Two Women Travelers in a Troubled Land